You can’t run away forever,
But there’s nothing wrong with getting a good head start.

We are storytellers by nature: we are compelled to draw our foundational myths. They tell us wherefrom we have come, and whereto we are going. The Norse had Valhalla. Toto had Olympus.[1] Middle Earth had Mount Doom. The fallen warriors of the financial sector have the Iron Mountain.

It is your destiny. It is your final entropic repose. However youthful, beautiful, exuberant or ambitious you are; however wild your dreams, however impregnable your business case, however ingenious your pitch: the Iron Mountain draws you in. Gradually, incrementally, imperceptibly — but definitely. Time’s arrow hurtles toward it, drawn by its irresistible gravity.

The Cosmos may enlarge, but the individual hanks of space-tedium on which we ply our benighted trade twist, desiccate and curl at the edges, such that every one of us converges. The Iron Mountain is the navel of the world; the axis mundi; the omphalos.

Eventually, it will come for you. You will not know when, where or why, but you will know it when it does. You will collect your worldly things, your precious baubles— every last remnant of your existence — and consign it to a meagre casket. It will not bear your name — by then, you won’t have one — simply your final destiny: the last, common, resting place for all mortal souls; the infinite, inertial lock: the singularity to which all corners of the space-tedium continuum buckle, fold and funnel the lost Children of the Forest: 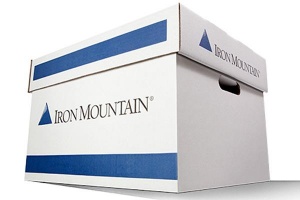 For it is written, in St. Pimco’s letter to the Hypocrites:

1 And they will open the rear gates to the Citadel and they will cast you out. And they will give unto you your cardboard box.
2 And you will be nameless. And you will have no future. And you will have no past. And you will be as barren as the dirt upon the badlands of the Earth.
3 And they will fireth not their cannons. And they will singeth not their lamentations. For they will acknowledgeth not your time on Earth.
4 And they will wipe the record clean of you. And expunge you utterly: your saintly works; the temples you built; the monuments you erected: all of yours that was great, all that was okay, and the whole massèd horde that was drivel. You shall be that massèd horde, and it shall be you, for it is thine handmaiden of dreck. And they will destroy those vain memorials to your works: they will tear them, brick from brick, until nothing beside remains but moulding rubble strewn across a salted wasteland.
5 And your legacy shall be the atoms: the dust that blows, the silt that accretes, the dunes that form from the anonymised powder of countless forsaken souls like yours.
6 For it is written: The Iron Mountain shall be the place from which no mortal soul returns, and nothing worthwhile remains.
7 We are but dust.

The Iron Mountain sounds like it ought to be a jagged, crystalline peak, thrusting into the sky like the shin-bone of a broken giant, presiding vertiginously over an abyssal canyon, plunging from the airless ionosphere miles down into the bowels of the Earth.

It may well once have been like that — the Bards sang their heroic songs about it, after all — but if it was, it is not like that now.

Now it is a vast, beaten-down, low-lying, warm, wet hillock. Because no energy or light can escape it, no-one quite knows where it is, but it sounds a lot like the sort of thing you might find if you went looking for it in Wales. One can — and those condemned to her perimeters do — walk for endless miles, always on a gradual incline, just steep enough to be persistently unpleasant to trudge up, in marshy, saturating earth. One is compelled to carry on until one can go no further, one’s remaining energy sapped, injected and equalised into the air, and one just osmotes; becomes one with the environment; an indistinct aspect of the tepid beige smear. The mount is beset by damp fog, thick enough to obscure your location and your destination, but clear enough to give you the fortitude to box on, in hope that you might one day get somewhere. But you never will. And the mount is noisy — beset with the existential moans, ringing captively around, of the countless souls who have become one with it.