A unique reference to an external thing that has been cryptographically encoded on a blockchain. Rather like a derivative (!) an NFT does not confer ownership on its referent, or even contain a copy of it, but — unlike any other copy of the referent it is a unique token of one’s, er, non-ownership of the referent. There is no other token of non-ownership quite like it, you see, and given how the blockchain works, it is quite impossible to create one. That is why it is “non-fungible”.

Now this would not stop someone else from creating a different unique token representing the same referent on the blockchain; the two tokens would just be different representations of it. Not identical: each unique. With me? No? Don’t worry: that’s not your fault.

Somehow this crypto-token magically bootstraps itself to some kind of intrinsic value. This, we sense is not so much because blockchain is clever, but that people who buy non-fungible tokens are stupid, or at any rate (as we shall see) lacking any sense of irony. For all the NFT demonstrates is that blockchain has solved the problem — if it even was a problem — of “how to make a non-copyable thing in cyberspace.”

This is not quite the same as — it’s not, er, fungible with — “making a non-copyable artwork on the internet”.

Now non-fungible token buyers might be lacking in their faculty for irony; NFT sellers have more than enough to go around. Some bright spark hatched the idea of taking an already subversively self-referential artwork — one that plays with the idea of its own lack of intrinsic value, being a print, of a graffito, which is called “Morons”, which in its subject directly addresses the gullibility of art buyers, actually having the words “I CAN’T BELIEVE YOU MORONS ACTUALLY BUY THIS SHIT” written in capital letters on it and, without the artist’s involvement,[1] putting a (er, non-representational) representation of it on a blockchain and selling that.

Still, the seller perceived a rather bricks-and-mortar-ish, old-economy sort of perceptual problem: what if buyers worry that the physical work might seem somehow more intrinsically valuable than its crypto-token? I mean, just imagine.

The token-seller’s solution: buy the original print[2] and destroy it:

There are two words I want to pick out from the above: “smart”, and “morons”. One of them is apposite to the someone — also anonymous — who bought it, and you don’t even know for sure that that dude[3] isn’t the gimp in all of this because — who can say? — some even stupider person might buy it for more.[4] That is someone-call-Alanis-Morrissette-grade staggering. 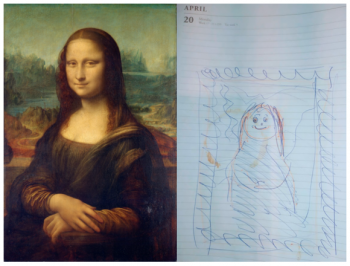 Let’s just work that logic through by analogy. To the right we have two images. One is La Gioconda. The other is a picture I just drew of it. I accidentally put my coffee mug down on it but I think that makes it look a bit more authentic. Now, both of these are unique representations: one is hanging in the Louvre, as we all know, the other is on the 20 April page from my desk diary from last year. Wikipedia estimates the 2019 value[5] of the Mona Lisa as USD 850 million. If we take that valuation as fair, I don’t think it is stretching things to say that the combined value of the real Leonardo original and my “unique token” of it — to be clear, that is the real thing, in my last year’s desk diary, not the feeble photographic facsimile you see below — is more or less exactly USD 850 million.

With me so far? Now for the krazy alchemical step: let’s say we burn the Mona Lisa. Obliterate it. We may need Robert Langdon to help with that, I grant you, but let’s just say. What is the value of my token now? EIGHT HUNDRED AND FIFTY MILLION BUCKAROONIES AM I RIGHT???

Is everything as it seems?

This might seem a preposterous question. But perhaps the buyer and seller are in fact the same single person, perniciously trying to create an artificial market. If so, so what if the only bid is 500 bucks? It’s still 500 bucks. That’s a month’s work in some places. If this is a scam — and I have no idea — it is so ironic it is almost an artwork in itself.

In any case, bitcoin in general and NFTs in particular throw into sharp relief some fairly metaphysical questions about value, identity and authenticity that the information revolution has been lobbing around for a while now and which, in most of us, haven’t generated much more that a nagging feeling that our conventional models of the world might be due an upgrade.

Is it different this time? Or are we just looking at Wylie Coyote, treading on air, momentarily defying gravity before —