“But if variations useful to any organic being do occur, assuredly individuals thus characterised will have the best chance of being preserved in the struggle for life; and from the strong principle of inheritance they will tend to produce offspring similarly characterised. This principle of preservation, I have called, for the sake of brevity, Natural Selection.”

— Charles Darwin, On the Origin of Species, Chapter 4

Firstly, bad metaphor watch: be careful of using the word “evolve” when you mean “develop”. Evolution is the process of spawning and dying, and leaving it to the obstreperous gods of Earth, Wind, Fire and Water to figure out which, if any, of your progeny should survive.

Now, if you’re the COO of an established financial services organisation, we respectfully submit that throwing your infants unchaperoned into the mindless ravenous maw of nature to see how they get on while you shuffle off your mortal coil is not what you should be aspiring to put your organisation through. Evolving involves you dying, and the — ah — lion’s share of your children dying too, for the betterment of some unseen replicating subcomponent of the greater whole.[1] Dear COO: your job is to protect your firm from the red claws and teeth of nature, not to feed them.

In essence,[2] evolutionary theory is that organisms evolve through a mindless, iterative process — an algorithm. Each iteration has three components:

The process is one of “trial-and-error” or “generate-and-test”: The problem is how best to survive and replicate in the given environment; the “best” solutions for the process continuously generate new trials, test them, discard failures, and keep the successes. 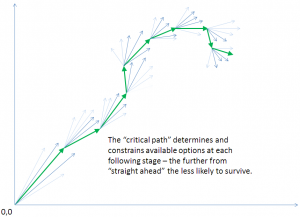 Each step constrains the possible directions for the next step. 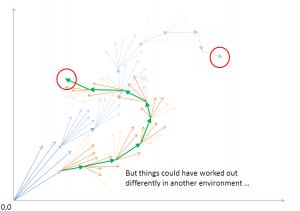 Observations on the evolutionary process

(a) the organism itself;
(b) all other (evolving) organisms in the biosphere; and
(c) changing climate, whether through:

Now, that out the way, try this. Evolution by natural selection — Darwin’s dangerous idea — is the greatest of all scientific achievements — or not science at all?

Let’s see if this works. A scientific theory must tell us something about the world: it must make a prediction that does not follow as a matter of irrefutable logic, that could, in theory, be false — thereby cutting down the number of possible outcomes, and making those that remain more predictable. It must be, in Karl Popper’s argot, falsifiable. Not false, but able to be false. F= M*A is a “synthetic statement”. You need evidence to support it. It is “falsifiable”, because an outcome where force does not equal mass * acceleration is possible. Indeed, Einstein found some examples. By contrast, 2 + 2 = 4 is not falsifiable: it is true by definition — it is an analytic statement. For 2 + 2 not to equal 4 would mean changing the meaning of “2”, “plus”, or “4”. Assuming we are using mathematical notation correctly, 2=2=4 is a priori true. In this way, mathematics may be the language of science, but it is not science itself.

Now, in which camp does the theory of evolution by natural selection fall? If is falsifiable? Patrick Matthew who first discovered it, before Charles Darwin, thought not. Responding to Darwin’s gracious concession of his priority, Matthew said:

“To me the conception of this law of Nature came intuitively as a self-evident fact, almost without an effort of concentrated thought. Mr. Darwin here seems to have more merit in the discovery than I have had; to me it did not appear a discovery. He seems to have worked it out by inductive reason, slowly and with due caution to have made his way synthetically from fact to fact onwards; while with me it was by a general glance at the scheme of Nature that I estimated this select production of species as an a priori recognisable fact— an axiom requiring only to be pointed out to be admitted by unprejudiced minds of sufficient grasp.”[3]

If there is any kind of ongoing competition for resources, and participants in that competition replicate themselves with minor variations, and those variations alter the succeeding replicant’s fitness at competing for the resources it needs, then those variations which increase the replicant’s fitness will survive more frequently than those with variations which do not, over time the community will change in the direction of that “fitness”.

This seems to be just as analytic as the mathematical statement: the hidden tricksiness is in the notion of fitness. That’s where the hard work is done; that is where all the synthetic work sits. What counts as “fitter”? How do we predict that? On this, evolutionary theory has nothing to say. It doesn’t predict where organisms are going next; it merely gives an account of how they got to where they are now. Its only prediction is “it is highly unlikely that organisms won’t continue to evolve somehow”.