“The nuts”, when engaged in a game of Top Trumps Military Planes edition.

There’s no way anyone can beat the engine count on a Boeing B-52 Stratocruiser: there is not an aircraft designer in history foolish enough to try to fit nine engines on the same plane — these days, four is considered profligate — and even in the giddy heights of the Cold War, Boeing only tried it once. Thus the B-52 stands alone, quite unimpeachable. 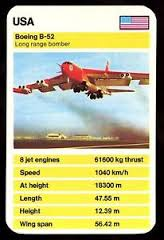 So peachable,[1] in fact, that in the modern edition they removed the “engine count” criteria altogether. Some people just don’t like to be beat, I guess.

“Eight jet engines” is its own kind of knee slide, and legal eagles of a certain vintage — mine — may happily squawk it, as they dispatch that exquisitely-timed mark-up, wry rejoinder, devastating provuso, or potentially game-changing industry initiative.

But careful: it is easy to confuse a real eight jet engines situation with the much less edifying “two Wankel engines” scenario — so named for the Mazda RX-3’s curious double rotary configuration, as featured in Top Trumps Supercars edition.

In a game designed to rank items by reference to their common attributes, The rotary Mazda is oddly sui generis, and when it crops up in a hand, just confusing, and you wonder what the manufacturers had in mind by including it.

The player opting for the “Wankel gambit” quickly starts to wonder that, too. He discovers what he thought would be a triumphal master stroke was nothing of the kind: instead of yielding to his wizardry, fellow players find it trying. They are momentarily baffled, then sigh, side-eye each other and swiftly form a consensus that since there is no dimension of human endeavour in which an 1800cc motor capable of generating 85 horsepower — however funny its name — would outdo a 370 brake horsepower seven litre V12, the Lamborghini wins, and signal a desire to move on.

Faced with this accord, the sensible “Wankeler” accepts his peers’ judgment, nobly surrenders his card and carries on; the foolhardy one stamps his feet, insists hotly that it is he who has been mistreated, and storms off to stew in righteous dudgeon about the cruelty of the world.

But enough about me, readers.