SYNOPSIS: Some cheeky little hobbits form a fellowship and set out on a perilous adventure to confront the fearsome Smarkup, a wingèd dragon made out of boilerplate that jealously guards the huge pile of rent it has appropriated from nearby merchants.

“The quotidian is a utility, not an asset.”

Boilerplate. No legal form has more of it than an NDA. To read one is to behold pure, abstracted, essence of boilerplate. In an NDA, boilerplate is all you get.

Yet generations of legal eagles, back to the time of the First Men — lo, even unto the very Children of the Forest — have dug themselves into slit trenches to argue the toss over this workaday tract. It has been some kind of insane compulsion: not one of them enjoyed it; not one of them saw any point in it; they found themselves compelled to do it; drawn to it, like moths to a gaslight; lemmings to a chalky cliff.

“I must negotiate this NDA, because this is what I do. It is in my nature.”

Kudos, therefore, to the team at TLB for doing something about it.[1]

The JC put his sclerotic old shoulder to the wheel, for whatever that was worth, and commended his friends, relations and readers to do the same; especially those who occupy places in the firmament, or up the fundament, higher than his own.

Start with the NDA, who knows where it may lead?

The hobbity fellowship resisted the impulses to which we tragic agents of the commons resort by habit: the bickering, the special pleading, committee drafting, pursuit by ring-fixated goblins muttering baffling ancient curses: despite cannons to the left and right, onward rode the OneNDA Steering committee, and generated a nice, simple, pleasant first edition.

Not perfect — is anything? — but absolutely good enough.

It’s too early to stand on the poop-deck in front of a mission accomplished banner, but OneNDA is getting there. We remain hopeful and optimistic. So, here some observations about what it could all mean.

Simplification beats technology — and helps it.

If you simplify, you may not need technology. There is no need for automation, document assembly, even a mail-merge gilds the lilly. Despite what the thought-leaders say, the problem facing modern legal eagles is not service delivery, but service itself.

Fix the content, and the delivery challenges fix themselves.

An ironic consequence: if you fix the content, you need less technology, and the technology tends to work better. To design for technology, design for no technology. The fewer options, subroutines, caveats and conditions precedent in your legal forms, the easier they will be to automate. You will get all kinds of second order benefits too: fewer complaints, fewer comments, less time auditing your monstrous catalogue of hateful templates.

First, cut out the pies.

It’s not the form, or even the content, but consensus that matters

Once upon a time — until 2021 — if you devised your own NDA, however brief or elegant, you could expect it to be rejected[2] or marked up to oblivion by the rent-seeking massive.[3] Your voice was but a guttering candle in a gale of special pleading. Collectively we despaired of NDAs, but, taken individually, we found ourselves curiously invested in them. Hence, slit trenches.

But an outbreak of public spiritedness can change that, and that was OneNDA: interested people came from far and wide to help; everyone[4] checked their agendas at the door. This was what Wikipedians call a “barn-raising”. The community came together for the greater good of all.

Now once a barn is raised and community feels ownership in it, it is the very fact of the barn, rather than how it was built or what it is made of, that is its value. Community assets accrue to the benefit of everyone. The structure might not be perfect but nor is there any interest in undermining it, much less setting fire to the roof: everyone has a stake in the barn. Everyone has skin in the game. The more it is used, the stronger it gets.

The more people use it, the more “good enough” becomes “perfection”.

The hard lines discourage rentsmithing around the edges

And it gets better. Once a common standard exists, the hard lines around it dampen peripheral legal-eaglery around edge cases, because it isn’t worth it to argue them. Not even for a pedant.

We all know the common fripperies thrown into an NDA negotiation by way of a dominance display: indemnities; exclusivities; non-solicitation and so on. These are quickly rejected out of hand, but the courtship ritual of inserting then removing them is not just tedious: It is costly, distracting, and takes time.

By insisting on hard lines around itself, OneNDA makes itself unavailable to host that kind of pointless rutting. And it is hard to rentsmith without a “host” contract. To do it, the rentsmithor must find a new host agreement, or make one, for a plainly cosmetic purpose. It will be discouraged from doing that for fear of looking stupid.

Shifting the knee of the curve

The more a contract costs to negotiate, the fewer of them you can do. There’s no free option if everything is negotatiated. 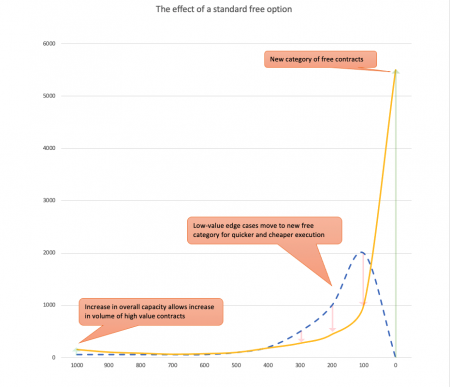 Adding a free, no-negotiation option creates a range of customers you couldn't afford to onboard, but incentivises marginal cases to take the free option too

Creating a simple and standard alternative affects the “legal complexity curve”.[6] It pulls it down and to the right, being the directions you want it going in.

Let us tell you a story, through the prism of some fancy charts. They are stimulations of a real-life case.

The problem: a broken contracting process: too slow, too costly, too many errors. The “complexity distribution’ was just as you would expect: lots of low-value contracts, a few high-value ones. The errors were spread evenly throughout: most, therefore, in the low value contracts.

The idea: reduce the negotiation workload and somehow give the team more time to focus on the higher value contracts.

The approach: standardise just the lowest value contract. It was easiest to fix, most boring, and had the highest volume. Leave the rest be.

Outcome: Overnight, half the contract volume was automated.

The one thing that did not happen was the forced redundancy of the team. They were busier than ever, only on more challenging stuff.