The theory of consciousness that asserts that a new personality emerges from the networked personalities of those in the organisation. Evidence, too, of the non-zero sum game that multinational organisations play, for somehow they persistently generate the cash flow to pay the absurd salaries their employees demand without it ever being apparent quite what any one of those employees does to deserve it. If a multinational is a goose, then its roster of employees would be the messy, pungent mix of bloodied feathers and viscera left when the farmer has cut it open in search of a golden egg.

So, for example, the idea of displaying, in foot-high letters, “WINNING MINDSET” over the entrance to the ground floor lift lobby by way of clumsy neuro-linguistic programming of your worker-bees as they roll up for their daily toil is not a decision traceable to any particular individual (this is not to say that a single individual could not be so brazenly stupid, but that such a person wouldn’t admit to it without at least the diffusionary butt-covering afforded by the circle of escalation).

Rather, this springs fully formed out of the higher consciousness of the hive mind. 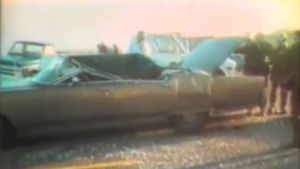 Or, for a more distant example, take the celebrated exploding whale of Lane County, Oregon, from 1970. See the entertaining news report in the panel, which covers the event since well before it happened.

What is most amazing here is not that onlookers, held behind barriers a quarter of a mile away, had to run for their lives while brick-sized lumps of stinking, fetid, whale flesh rained down on them from from the sky, but that no-one — not the highways authority, not the project manager, not the forklift driver, not the reporter, not the film crew, not the gelignite vendor, not the hundreds and hundreds of spectators — not a single one of them asked that most basic of questions: “you are proposing to detonate a rotting sperm whale with half a ton of dynamite. Have you completely lost your mind?”

Actually, one man had, and this is where the irony gets positively Homeric. A certain Walter Umenhofer, a military veteran with explosives training who happened to be in the area to take advantage of a “Get a Whale of a Deal!” promotion in a nearby car dealership, warned anyone who would listen that half a ton of dynamite was far too much. Umenhofer suggested 4 kg would be enough. His advice went unheeded.

Miraculously no-one was hurt during the blast.

There was just one casualty: a brand new Oldsmobile Regency 98, flattened by a hunk of blubber the size of a truck tyre. It was Umenhofer’s brand new car. A whale of a deal, indeed.

Contra the hive mind: homogeneity as a good thing

Thought leaders may declare that there are cases where heterogeneity — contrarianism to you, dear reader — is a bad thing. “homogeneity is important to bind your people to a common purpose and vision,” these people will say. Heterogeneity can weaken and undermine that sacred, fragile flame.

We happy heterogeneticists would beg to differ. The problem in our darkened times, is quite the opposite: a hive mind stampeding after shiny but quixotic ideas: crypto-currencies, non-fungible tokens, AI, ESG and critical theory, some of which (particularly critical theory) are engineered — ironically enough — to quash contrary voices. There is very little “wacky contrarian” risk. Minority contrarians can’t hurt you. Fashionable yogababble can.

Now: heterogeneity fails only when it produces incontrovertibly stupid or pernicious ideas — that cannot be quickly assessed and, if need be, rejected on their merits. In a wicked environment there are very few of these, and in a “tame” — closed, bounded, fully understood — environment they are easy to dismiss: in a game of football, the undoubtedly heterogeneous idea to pick up the ball is stupid and no-one will do it. But even there … well, just ask William Webb Ellis whether it was a stupid idea to pick up the ball and run with it.

Situations where the consensus view is so unarguably right that there’s no scope to challenge it are pretty much non-existent in commerce. Many of the our great crises of the past have come out of apparently sensible homogeneous consensus, and in the face of a small, vocal, but ignored heteregenous dissent. LIBOR. The global financial crisis. Madoff. Enron.

We operate in a non zero-sum, not-bounded, incomplete, ambiguous environment it is hard to see how having some level of dissent doesn’t put you in a better place.