A sub-custodian therefore doesn’t have a direct contractual relationship with the client.[1]

Custody risks ought to be fairly minimal: Unless the sub-custodian is in a weird jurisdiction[2], it should never take beneficial title to the assets it holds, and should have segregated them from its own assets, therefore beyond the putative reach of its ordinary creditors — so the assets remain the client’s at all times — so they should return to the client even on the custodian’s insolvency. It follows that, if client assets are not where they are meant to be on a custodian’s insolvency, there must have been some kind of operational mismanagement, negligence or fraud on the custodian’s behalf (and its insolvency). Since the operating cause of the loss is the mismanagement, not the insolvency itself, any capital charge should reflect operational risk and not credit risk.

None of this will stop custodians invoking the “Lehman” horcrux, of course.

Now if a sub-custodian profoundly breaches its custody obligations — which it owes to the main custodian, of course — should that custodian be able to pass its loss back to its innocent client?

It will say “yes” — of course it will — but to what degree has it been complicit in its delegate’s failure? Was it properly monitoring the sub-custodian’s performance? Was it duly diligent in appointing it? The custodian will wail, chomp and complain that it can’t be expected to price flakiness of unaffiliated third parties in far-flung locales into its business offering. Fair, perhaps — but then it did hold itself out as being in some way competent in the safe-keeping of customer assets didn’t it? Wouldn’t that include being diligent in monitoring the performance and capabilities of its custody network?[3] After all the custodian is usually a sophisticated global multinational with experience managing sub-custodians in far-flung locales and it does have contractual privity with them.[4]

The one place it makes some sense is in one of those weird jurisdictions where, by law or market convention, one cannot isolate custody assets from a local custodian’s insolvency. There, it is fair for the client to bear that risk (as it is the client’s choice to take on that “country” risk, and the main custodian cannot avoid it however prudent or diligent it is).


In most jurisdictions, exposure to a custodian for the return of client assets is not a solvency risk as such, seeing as the custodian should not beneficially own client assets and should have segregated them from its own assets, therefore beyond the putative reach of its ordinary creditors. It follows that, if client assets are not where they are meant to be on a custodian’s insolvency, there must have been some kind of operational mismanagement, negligence or fraud on the custodian’s behalf (and its insolvency). Since the operating cause of the loss is the mismanagement, not the insolvency itself, any capital charge should reflect operational risk and not credit risk. 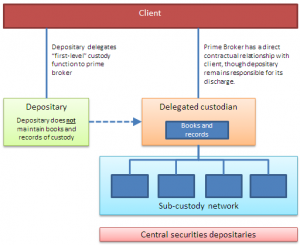 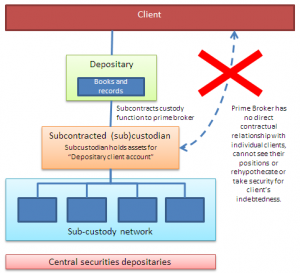 Delegation, according to a natural definition, means “to entrust (a task or responsibility) to another person, typically one who is less senior than oneself.”[5] So:

Careful though: Both CASS and AIFMD/UCITS are a little sloppy in their use of the word “delegation”, using it on occasion to mean something that is probably meant to refer to a subcontracting arrangement[7]. CASS only really talks about subcontracts, though AIFMD and UCITS deal with true delegation and subcontracts.

CASS 6 has a requirement that subcustodians provide a no lien letter to confirm they are not taking security of retaining any other rights over custody assets other than customary liens and charges as security for their ordinary fees and expenses.

This is because, between an end client and a subcustodian, there should be none. A subcustodian will generally hold assets in an omnibus account in the name of the main custodian (but for its clients), therefore will not know the identity of the end clients, much less have a relationship with them, and therefore should not have any direct liabilities against them (at least that have anything to do with the subcustodian relationship).

This is in contrast to the main custodian, who necessarily knows who the individual clients are and, if it is a prime broker, is likely to have lent money to individual end clients to purchase those specific securities, and a term of that finance will be that the client grants security over the assets in question, as well as possession (hence they are held in custody) and rights of reuse. Because it will have individual custody records the prime broker as a head custodian will be able to take security directly over an individual's securities within its books and records, and not over the whole omnibus pool.