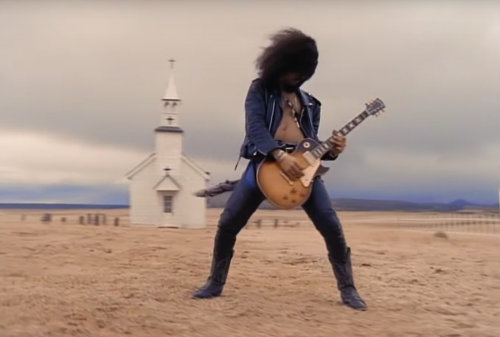 The slash ( / ), also known as the virgule, has several uses, most of which (sayeth the punctuation guide) one should avoid in formal writing.

On the subject of conjunctions, never, ever, ever use the expression “and/or”, much less “and, as the case may be, or”.

There’s just one Slash who looks good in public, and he’s in Guns ’n’ Roses. (The Guns ’N’ Roses axeman, real name Virgule Hudson, first acquired the nickname by which he later became world-famous, on account of his over-use of the virgule in his freshman year at Stamford Law School).[2]

Odd spot: the charming American Gothic church in the November Rain video, right, was a fake, made out of the cardboard on the day. It is therefore quite easy to recreate this shot, in your local park. All you need is some cardboard, sticky tape, a silly wig and hat, and a drone with a go-pro (or in my case, an obedient child with an cameraphone on a bicycle).