Failure by either Party to deliver - GMSLA Provision

Clause 9.3 of the 2010 GMSLA is identical to Clause 9.2 of the 2018 Pledge GMSLA but for the fussy references in the pledge document to “instructions to the Custodian to deliver Posted Collateral” (because the Posted Collateral under a pledge is never transferred to the Lender in the first place, but rather is held by the Borrower’s Custodian subject to a pledge in favour of the Lender, so the Lender isn’t technically in a position to deliver it back).

Fun comparison: the 2002 ISDA Equity Derivatives Definitions completely botch the equivalent settlement failure terms for equity swaps. What business you have physically settling synthetic equity swaps is a whole other question of course — so it doesn’t really matter — but for a spot of gratuitous bafflement, look no further than Consequences of Failure to Deliver under Section 12.9(b)(ii) of the 2002 ISDA Equity Derivatives Definitions.
Template

See the discussion on mini close-out under the 2010 GMSLA (and the 1995 OSLA for that matter) and also the general discussion with regard to this clause in its wider context at clause 9.


Note also the clear exclusion of indirect and consequential losses, as well as losses to which the Transferee is contributorily negligent. [1]

Are references here to interest to, like default interest under Clause 11.7? And if so are we in a world of LIBOR remediation?

Well, this old fellow’s opinion is no. Clause 11.7 of the 2010 GMSLA is specific to costs following actual close out on an Event of Default (a Buy-in isn’t an Event of Default), and only on professional expenses. The vibe here is you reimburse me my actual costs. So, the actual interest cost I incurred in funding the securities I bought in, rather than some abstract derivative notion of my costs represented by a benchmark.

Does it make sense to replace this clause with some convoluted shtick about the costs of Replacement Transactions or otherwise hedging the innocent party’s exposure? To determine follow this flow chart: 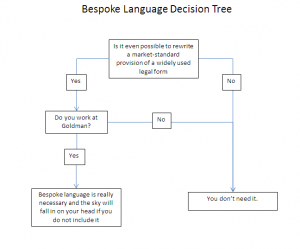