Once upon a time, not terribly long ago, a shareholder was an opaque yet sacred being, somewhat divine, to whose improving ends everyone engaged in a company’s operation twitched their every fibre.

This will to shareholder return sprang from the brow of Adam Smith and his invisible hand:

“...Though the sole end which they propose from the labours of all the thousands whom they employ, be the gratification of their own vain and insatiable desires, they divide with the poor the produce of all their improvements...They are led by an invisible hand to make nearly the same distribution of the necessaries of life, which would have been made, had the earth been divided into equal portions among all its inhabitants, and thus without intending it, without knowing it, advance the interest of the society, and afford means to the multiplication of the species”[1]

This was, a breathtaking insight; no less dangerous than Charles Darwin’s: from collected, unfettered, selfish actions emerges optimised community welfare.

The modern corporation is, philosophically, the embodiment of that idea. Look after the shareholders, and society will look after itself.

By pursuing only its shareholders’ enrichment the corporation, so the theory had it, was more nimble, more responsive to society’s demands, and able to magically allocate capital wherever the community most needed it at any time.

“Compare this,” declared gleeful proselytes, “with the disasters of central planning, five-year plans, great leaps forward and so on.”

Shareholder capitalism had its advantages, to be sure: not least of which was easy performance measurement: one could evaluate every impulse, every decision, every project, every transaction against a single yardstick: was this in the shareholders’ best interest?

Shareholders’ interest, in turn, could be measured along a single dimension: profit. Nothing else mattered. The professional-managerial class, and their endemic agency problem, were hemmed in: you can’t hide from after-tax profit.

Well, that was then. What was unarguable orthodoxy in 1985 has fallen from grace. The narrative has changed to fit our millennial world. Unalloyed selfishness has become, to the modern conscience, intolerable.

Dangerous, even: in 2003, legal academic Joel Bakan put the argument that since a corporation’s sole statutory motive is the short-term enrichment of its owners, it has the clinical characteristics of a psychopath.[2]

Things have only got worse since for Adam Smith’s conviction in the emergent goodness of shareholder profit.

We are cancelling and redrawing the world: let us cancel and redraw our corporate aspirations too. Shareholder capitalism is, by design, venal, selfish and riven with bias. Its stampede for profit demonstrates an abject want of care for everyone else.

We, the planet, ask corporations to orient themselves toward all their “stakeholders” — customers, creditors, suppliers, employees, the community, the environment, the marginalised multitude that suffers invisibly under the awful externalities of industry and — last, but not least! — shareholders.

Corporations must not profit at the expense of the wider world.

This view seems so modern, so compassionate and so right — so fit for Twitter — that it is hard to see how anyone can ever have thought otherwise.

But still, this is a striking reversal: it passed with barely a shot fired.

Even that trade union for unreconciled boomer gammons, the Business Roundtable joined in: last year, it “redefined the purpose of a corporation” away from the outright pursuit of profit towards promoting an economy that serves all Americans.

“It affirms the essential role corporations can play in improving our society,” said Alex Gorsky,[3] Chairman and CEO of Johnson & Johnson and Chair of the Roundtable’s Corporate Governance Committee,[4] “when CEOs are truly committed to meeting the needs of all stakeholders.”

But stakeholder capitalism codifies the agency problem. It diffuses the executive’s accountability for anything the corporation does, putting the professional-managerial class beyond the reproach of the one constituent stakeholder group with the necessary means, justification and consensus to call it out: their shareholders.

Under Joel Bakan’s theory, remember, it is not the shareholders who are psychopaths, but the corporations they own, as distinct legal persons.

The shareholders are only a motivation for the corporate pathology. Which is just as well, because shareholders, ultimately come from all walks of life: through our retirement plans, 401(k)s and ISAs, we are the ultimate shareholders:4 diverse in every conceivable dimension, bar one.

Shareholders don’t have to know each other, like each other or care less about each other. On any other topic, their aspirations and priorities will jar, clatter and conflict. If you put them in a room to discuss anything but their shareholding, you would not be surprised were a fight to break out.

But on that one subject, they are totally, magically, necessarily aligned: each will say, “whatever else I care about in my life, members of the board, know this: I expect you to maximise my return.”

Besides, to ditch this narrow financial interest is to miss the single clinching insight. As long as it is all about return, there can be no arguments.

The abstraction of value and the important of cash

Long ago, our forebears in ancient Mesopotamia hit upon a way to abstract pure, disembodied value from the relativising commodities or perishable substrates in which it is usually embedded: they called that abstracted value “money”.

Cash does not go off, cannot be eaten, and does not depend for its value on anything else. Cash is abstract value.

Hence its value as a yardstick for corporate performance. In discharging their sacred duty, those stewarding the affairs of corporation could not have clearer instructions: should the return they generate, valued in folding green stuff, not pass muster, there will be no excuses.

There is no dog who can eat a chief executive’s homework, no looking on the bright side because employee engagement numbers are up, no consolation to be taken in the popularity of the company’s float in the May Day parade: if the annual return disappoints, members of the executive board, expect to get shot.

Now, before you cry, “but surely, shareholders need no protection from chief executive officers! It is the disenfranchised underclass at the margins of society who must be protected!” consider the data published by the Economic Policy Institute in 2018,[5] which maps CEO compensation against worker compensation and the performance of the S&P500 since 1965. It gives a pretty good picture of how shareholders, workers and executives are doing relative to each other. Worker compensation has improved at an annualised rate of 2.5%. Shareholders gained at 8.5% per annum. The overall return for Chief Executive Officers since 1965 shows a growth rate of thirty five percent per annum.

So before we cast the poor shareholders’ interests to the wind, ask this: by switching to stakeholder capitalism, who benefits?

When shareholders hold the whip hand, an executive’s goal is simple. Make money. That clarity of purpose evaporates the moment that remit expands. Multiple stakeholders means multiple interests, which must conflict. How do you arbitrate between creditors and the local community? Between the environment and customers? Between penguins and polar bears?

That is before the key question even presents itself: who are these stakeholders of whose wellbeing I am suddenly guardian? There is no ranked list. Unlike shareholders, whose names and stakes are set out on a register, the constituents, interest groups, factions, priorities, narratives and moral imperatives of “the world at large” are utterly indeterminate.[6]

How do you even know what your stakeholders’ interests — beyond having as much of your soda pop as you can make, as cheap as you can sell it — are?[7]

Whose interests have priority? Why? Now a failure to generate a decent cash return can be blamed on — well, anything — your success in reducing the number of smokers in the accounts department, or your community outreach team spent all your excess cash on beautifying a local park, or you chose a buildings manager who was twice the going rate but had a better anti-modern slavery policy.

Stakeholder capitalism means the executive class always has an excuse. Always. For everything. To run a company for the world at large is to run it for no-one. And when a professional-managerial class of agents can’t work out who else’s interests to put first, what do we expect them to do?

Are corporations best-placed to look after everyone else’s interests?

Yes, customers are your stakeholders, and they have an interest how you conduct your business, but — at least in a healthy marketplace — they have a means of controlling that a lot more direct, regular and effective than do shareholders: they can buy something else. You can only maximise shareholder return by persuading lots of customers to buy your stuff.

By contrast, shareholders are a bit like voters in a representative democracy: their main weapon is the power of sale; beyond that, there’s the AGM, and unless you’re an institutional money manager, don’t expect anyone in the C suite to be massively bothered how you vote.

Employees — especially those in the executive suite — have all the power they need to influence the company. They are there, every day, making every decision. 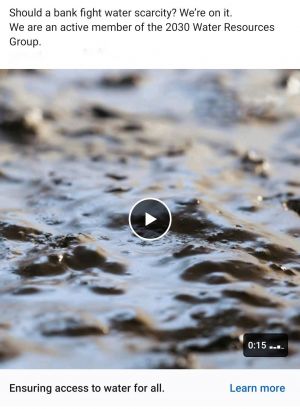 Well, if it were up to me I’d spend more time managing the risk in my loan book tbh.

Of course the disenfranchised minorities at the margins of our community need a voice. As we argue elsewhere, an optimal society is pluralistic, tolerant, defends those at the margins and, all other things being equal, prefers their interests when they conflict with the majority that is perfectly able to look after itself.

The question before us is not whether to protect their interests, but how. There are plenty of better ways: representative democracy, for a start.

But even so, shareholders are not monolithic investing homunculi: they are ordinary people with disposable income. If they want to beautify the inner city, save polar bears or fight water scarcity, they can do that directly. That is a far better way to allocate capital. It puts control in the investors’ hands, where it should be. Investors do not need to channel their charitable activity through the medium of their equity portfolio.

We cannot fathom the moral agenda — if there is one[8] — behind an investor’s decision to invest in a bank stock. Who knows if they care about water scarcity, or polar bears? But if the alternatives are “assume they are basically after a capital return” or “let the chief executive decide what the moral priorities of her shareholders are”, then it is not a difficult choice.

A bank should prioritise prudent lending standards and timely risk management. It should stick to its knitting. Governments, NGOs, supra-nationals and dedicated charities with resources, expertise and focus can deal with water scarcity. If bank shareholders want to address water scarcity, they can give their disposable resources to water scarcity specialists. That is surely more effective than buying bank stocks.

The proposition that a disembodied pile of papers is intrinsically psychopathic is a bit far-fetched. The proposition that the collected shareholders of all listed companies in the world are all psychopaths is even more far fetched. The idea that, against the average, those who make it to the top of the greasy corporate pole have an element of the sociopath to their personalities? That’s not far-fetched at all.